Vraiment Beau » Blog, Guides & Infos » English » Our practical Guide » Calculate the parameters for the lighting that you need

Calculate the parameters for the lighting that you need

If you regret the time when it was enough to read the consumption in watt on the box of your bulb to choose the luminous intensity that you needed, then this page is for you. It explains the main parameters used to describe the characteristics of the modern lights, and in particular:

2- Luminous power and energy efficiency of the bulb

A light bulb is like an energy transformer: it consumes electrical power – which goes to your electricity bill – and transforms part of it into light. This transformation is not perfect, a significant proportion of the energy is transformed into heat. Each technology (fluo-compact, halogen, traditional incandescent, incandescent halogen, LED) shows a different performance. In addition, two bulbs of the same technology can have very different yields, depending in particular on the quality of their construction and of the materials that are used.

The amount of light emitted by a bulb is measured in lumen. Historically, the lumen was defined by its inventor (Perley Nutting at the beginning of the 20th century) as the total luminous flux emitted by a source of wavelength of 555 nanometers with an intensity of 1/683 watt (in 1979 , this definition was simplified by introducing the candela, see below our paragraph on the candela). It is important to note that the lumen measures the luminosity perceived by the human eye, which is more sensitive to light at the center of the visible spectrum than at its extremities. The 555 nanometers correspond to a yellow-green frequency, close to the maximum sensitivity of the human eye. An ultraviolet lamp for example, which emits an invisible light for the human eye, will produce a luminous intensity of zero lumen, whatever its power!

At a given wavelength (the “colour”) and with the same electricity consumed, a bulb with a high efficiency will emit more lumen than another with a lower efficiency. This yield is measured in lumens produced per watt of electric power consumed. (Note for the more technical: an interesting consequence of the definition of the lumen, is that a lamp – LED for example – which emits a light of temperature of 4000 Kelvin with a narrow spectrum, will show a much better yield than another LED of the same power, emitting the same average 4000 Kelvin, but with a much wider spectrum. However the latter will provide the best light quality, and the best colour rendering. In other words, quality bulbs that offer a high Colour Rendering, must be more powerful than lower quality ones, to emit as many lumens.)

The table below shows the electrical power consumed, the quantity of light emitted and the light output for a few examples of bulbs:

The best yields are obtained by the neon tubes – which explains why they are massively used in industrial or office lighting – and by the compact fluorescent bulbs – which are miniature neon lights. With light outputs of 50 to 60 lumens per W, they consume 4 to 5 times less current than conventional incandescent bulbs.

The best LED models also have high yields – and they are progressing rapidly as technology advances. For a long time LEDs had a deserved reputation for being a bit weak, but it is now common to find affordable LED bulbs announced with the 1000 – 1500 lumens (although again, rarely with a very high quality light).

Halogen bulbs offer a yield of about 18 lumens / W – an energy saving of 20% to 40% compared to traditional bulbs.

3- The efficiency of a luminaire

The efficiency of a luminaire depends on two factors:

Our eyes see surfaces and objects when they are illuminated. Illuminance measures the amount of light that illuminates them. The degree of illumination is expressed in lux. It is easily measured with the light meters, like those commonly used by professional photographers.

The table below shows several levels of illumination for illustrative purposes: 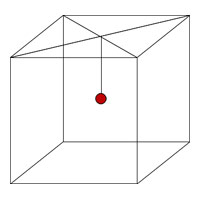 One lux is defined as the illumination of a surface that receives one lumen per square meter. It is a received intensity, regardless of the characteristics of the bulb that emitted the light (distance, power etc …).

If you take an empty room of 3 meters by 3 meters, where you hang a light bulb on a ceiling 3 meters high and which emits a flow of 2000 lumens (for example, a 100W halogen bulb without lampshade).

A bare bulb (or candle) illuminates in almost every direction. But many lighting fixtures concentrate most of the light they produce in a more or less narrow beam, often with the help of reflectors. By assimilating this beam to a cone, the width of the beam is often measured by an angle expressed in degrees (to be exact, it is a “solid” angle, measured in steradian). The smaller this angle, the narrower the beam.

If we come back our room example, but lit this time with a recessed spot in our ceiling at three meters height, then a beam of an angle of:

The calculator below will give you in the second column, the diameter of the illuminated surface according to the width of the beam and the distance of the luminaire.

To measure the luminous intensity produced by a bulb or a spot in its “useful” beam, professionals use another unit of measurement, the candela. The luminous intensity of a candela corresponds to a luminous flux of a lumen distributed on one steradian (the steradian roughly corresponds to a cone with a “plan angle” of 65.54°). Do you recall that the lumen was defined by Mr. Nutting with a curious ratio of 1/683 watts? Mr. Nutting chose this ratio so that one candela corresponds to the light intensity of a candle. For a more recent reference, a traditional incandescent bulb emits approximately one candela per watt.

Everything now fits together: the better you want to see what you are eating from a table, the more lux it must receive. The higher is the luminaire, the larger the surface of the table that is lit and the more light must be emitted by the bulb (that’s the candelas) to illuminate each square centimetre of the table with the same amount of lux. And if we now keep our light source at a constant height, then the larger the table, the wider we need the light cone to be, the more lumens will be emitted by the light and received by the table (lux multiplied by the surface of the table, or candelas multiplied by the width of the cone)… If in addition you want to showcase your tablecloth and your porcelaine, then you will need a bulb that has a high CRI, or if you want to heat your room (!) both of which will cost a bit of extra energy (measured in watt) to emit the lumens you need.

Dealing with candela is easier than it seems: the illumination E (in lux) of a surface placed at a distance D of a projector of C candela is simply: E = C / (D x D), regardless of the beam angle and the surface that is lit (both lux and candela measure intensities rather than total quantities). Two examples:

For a technical question that this page does not allow you to solve, our customer service is ready to help at +33 1 45 20 60 00 or by email to contact@vraimentbeau.com.

You can find further guidance in the following page:

You can also find below our advice to choose and install the various types of lighting you can find in our catalogue:

And to finish, if you want to start looking for a lamp, our product category catalogue, with all our lighting ranges. Or you can browse our illustrated catalogue of luxury brands.

Discover our selection of lightings of the month:

Today, the most beautiful table lamps made in France